Yawn, we don’t need another filmmaker to rant and rave about the struggles of Independent filmmaking and how he/she braved the storm or carried the torch to create yet another ‘masterful, unique’ Indie film that not many people(except of course his/her close circle of friends) would pay to watch or even watch, do we? In other words, do Indie films in India even matter, in the larger sense of the society? We are the insanely loudest democracy in the world so much so that even the big, typically commercial studio ventures get silenced pretty soon if not for the star-frenzy or the weekend hype they manufacture. And multiply that with the differences in regional languages. I can’t help but make the comparison with the Indie film scene in the US. Of course in the US, there is quite a sense of that camaraderie through Indie magazines like Moviemaker, Filmmaker, Film comment or even DIY film sites like Indy Mogul, Video Co-pilot and programs like IFP and Tribeca AA. These agents help and guide the larger Indie community or at least seem to have a space for the outcasts. And sometimes, they lead to successful creative partnerships that could lead to getting their voices heard. 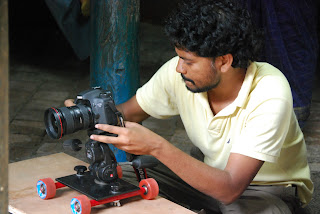 This is part of the reason why many Indian Indie filmmakers keep referring to the American independent film scene or deviants of the Hollywood system for some kind of insight. Is there a sense of an Indie community other than a few blogs that seemingly fight the good fight? Considering the already outcast status of Indie films, don’t these filmmakers need to stick together, in the sense of creating a din so loud with their films that they DEMAND to be heard and seen? Of course, even a couple of  reasonably informative web-zines(dearcinema) have only a minimal amount of posts by filmmakers that are creating something new or are off the beaten track. So to even say that we have an independent film scene would be an exaggeration, but we can think whatever we want to keep our restless souls assuaged. In that same vein when the filmmakers blame audiences for not coming out to support them, it seems like a bit overreached.

Pessimistic as it may sound but to romanticize the notion of Indie filmmaking as a way of being different for different’s sake without understanding the birth pangs would be tantamount to shooting oneself in the foot. The Indie community has almost every odd against them. So if they want to keep creating the work that they want, one has to have an unromanticized passion(if you can still call it that) towards their work or getting themselves to a place where they can at least not worry about satisfying the system or at least accept the fact that unless their work demands to be seen, they have to learn to accept the rejection. There’s this article about being a ‘nobody filmmaker’ which many filmmakers go through in their journey towards creating something meaningful. I think it’s part of the rite of passage or building character, the rejection and non-acceptance(in conventional terms) of work that you have passionately been churning, until you get that elusive ‘break’. Though I don’t completely agree that one has to bide their time to even think or aspire big.
So what do, ‘the insignificants’, ‘the nobodys’, ‘the outcasts’ category of filmmakers do in order to stay afloat, at least keep their head above water? The prime thing could be to keep churning out work that they truly believe in, at the same time and maybe(if it’s not much to ask) share a little bit of what they learnt during the process which kind of fosters a sense of support around each other. Having had a few encounters with ‘professional crew’ here, I sense a strong defensiveness about sharing what they have learnt over the years. As if teaching that to others would deprive them of their superior knowledge status and their careers. So in a way, that makes it even more compelling to do things unconventionally and hopefully result in an outcome that’s outside the box. And if there developed a forum where all things unconventional came together then that would gradually become the convention, where the Indies find the space they can work in and express the unexpressed. But as many have said before, truly ground-breaking work comes from limitations and deviations from the norm and so it is here that we learn more, from the trenches, the gutters, the filth and the stench of reality.
The above is a production still from 'Adiyaaluku Podiyal' (The Goon's stooge) where you can see our man 'Dass' wielding the Canon 7D. The rig that the 7D is mounted on, is our own, DIY, self-designed table top dolly with the stylish colors and the tripod head. Proof that the Indie spirit is alive and kicking.
Posted by AccHor at 1:38 AM No comments:

Just a quickie on how to get best quality output from HD footage to SD DVD. Thanks to Vijay for helping out with this.
1. Export as quicktime mov with Apple Prores HD codec. Same dimensions as your source.
2.  Encode to mpeg2 using Compressor. In settings, ensure "progressive" is selected, that you have 16:9 enabled.
3. Quality has plenty to do with bitrate you're using. Use variable bitrate (vbr). Somewhere in the ballpark of 3500-3800 kbps is a good number for avg bitrate for a 2 hour movie to fit on a 4.7 gb dvd.

Then play it on DVD player/TV to see results. Typically there's a big difference in watching on the computer screen as opposed to a TV screen.
Posted by AccHor at 12:54 AM No comments: