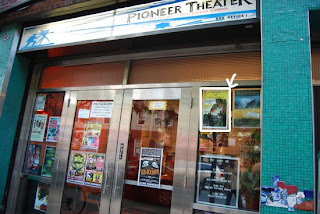 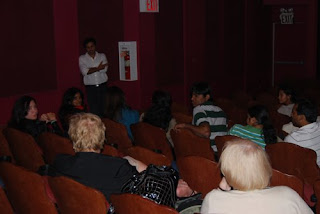 As you all know we had this fund raiser screening at the TWO BOOTS PIONEER THEATER on September 20th, 2008. It was a very beautiful experience though we had a turn up of only 9 people and it was 14 including us!!
Each person who had come for the movie liked Wings of Evolution so much and said that it touched their hearts. They said they were inspired by the love that Uma & Muthuram had for the kids and how the kids were so mature and wonderful. We got some more leads with regards to screening the film in other venues like schools, universities etc.
We got a chance to have one-on-one connections with every single person who attended the screening which was very unique. To know about people who love the world so much and who are trying to make differences in their own way was such a positive experience!
I know I did not write about the Urbana, Champaign screening which took place at the Independent Media Center through the School for Designing a Society. It went very well and the film inspired a lot of students who came for the screening. There was a teacher from Korea Ena who was interested in visiting the Siragu School for sometime because she said she wanted to learn about their pattern of teaching. Many of them wanted to visit the School personally and learn a lot. They were also impressed by the kids' strength of mind and their knowledge about the world around them.
More screenings will come and we will create a world-wide awareness till kids all over the world are educated for free.
One of my friends gave me a book called Three Cups of Tea about which I will write another article!
Posted by earthling at 1:09 PM 1 comment:

Our Friends at AIF

Hi all
Our friends at America India Foundation are organizing a fundraiser event in NYC on the 25th of September, 2008. Please show your support for the cause. Details below.

Posted by earthling at 12:55 AM No comments:

It can be YOU - interconnectedness!

Posted by earthling at 2:33 PM No comments:

Where the Hell is Matt? - A lovely connection!

Posted by earthling at 2:28 PM No comments:

FAST LOVE - something to think about!

Posted by earthling at 2:18 PM No comments:

When I was in West Virginia at the Summer School for designing a Society, the teachers there mentioned Herbert Brun. Though I did come across a few of his books, I really never had the opportunity to read any of his books until recently I came across one of his books called "My words and where I want them" and went through a few pages...they seemed interesting. Small paragraphs which are numbered fill the small book.
I would like to share a few with you.
1. My words and where I want them.
2. I consider words innocent until proven guilty. Once they are proven guilty, however, I consider their meaning to be irredeemable. Thus words form the limits of personal freedom. While I may be free to express my thoughts in a free society, the words at my disposal may not be free at all. Ignorance of this fact is what turns the thoughts of free people into thoughts of slaves.
76. While we do not find it possible often to share our opinions we have to share the world of their consequences.
for more..please read about Herbert Brun.
Posted by earthling at 1:38 PM No comments: