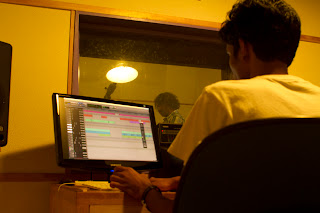 Yo Peeps, time for a little low-down on 500 & 5’s status quo. Things are sort of heating up again as we scuttle towards the finish line. If you’re wondering why the hell it’s taking so long to finish, we can only tell you one thing right now – that this is an Independent film project(which translates ‘You’ll have to do everything yourself’). Trust me, when I mean ‘everything’ and ‘yourself’ – I really mean it, in the dang-est sense of the words.

1. Like already mentioned, there are 2 songs(1 of which has 3 parts) and 1 poem-track which can be considered a quasi-song if you want. We are working on the fillers (and final touches) for the 2 songs. Panam(Money) and Ganamanatho Mounam(Isn’t this silence heavy?). The poem-song is Nee Sethuki Sethuki(You sculpt...). Once those are done, the next step would be to integrate it into the final film – with the visual lockdown.
2. Getting things ready for the Censor Board Certificate application. A bunch of stuff like the Lab letter, Title certificate, NOC, completed film in the form of a DCP(Digital Cinema Package), Publicity poster clearance, etc have to be readied and submitted during application. Will detail them later.
3. Getting ready for marketing...and preparing publicity materials like Newspaper Ad, Street/City posters, Radio Ad, TV trailer and other miscellaneous online reach. We don’t know how much of it we’re gonna follow through but. Most of the posters are ready, just minor tweaks.
4. We are thinking of some unconventional ways to reach out – going for something a little crazy and over the top. Basically, planning on the promotional campaign of 500 & 5. If you got any ideas, do give us a holler. More on this later.
5. Currently in discussion about where and how we are going to get the film out there. As of now, we have something a little staggered in mind. I doubt if it’s gonna be a traditional release.  But until we complete the 1st 3 steps, I don’t think we’ll get a consensus on that.
So there you go. We’ll post up more updates after the next phase is done with. Till then, do spread the word if you want to support Independent art and film. Lots to be done. Have fun. (Pic: Our Acoustic engineer Rahmath at AH studios mixing the poem-track. Way back in the booth is our man Dass)
Posted by AccHor at 2:04 AM No comments: 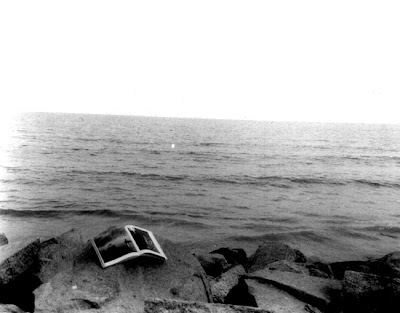 So what's new other than being sucked up into another vortex of life? I warn you, before you go on - this is a bit of a philosophical/existentialist rant(like many of my other ramblings). There's enough things in this world to really throw you off balance just when you think you're figuring it all out. I sometimes really can't fathom whether to laugh at the absurdities of life or marvel at the irony of existence. On the one hand, I love this thing called 'life' because it offers you a perspective of the world that no one else can see. On the other, I hate the concept of it, because it's packed with affirmatives and negatives that are often juxtaposed together and gives you the feeling that life just doesn't fuckin' make sense. I mean, why? Why, for gosh sakes, are we really here? I mean, who cares? Say something happens to me or you, like right now. Other than the people to whom we really matter to, our existence is totally vacuous. Ok then you might say since there may be a few people who do care about your absence, it should make some sense. But then, they are gonna keep living on, maybe with you in their memory. So I feel like, why the hell should I be attached to things and people in this reality? But then, however objectively I look at life, the subjectivity of it all just screws up the knowledge and wisdom you've gathered. How much ever I feel like detachment is the way to go, there's something so strong that pulls you in the way of attachment. But then again, attachments don't matter eventually. So there, see I've put myself in this thinking-time loop. I think I get it and the next second, I don't get one bit of it. These days my cynicism seems to get the better of me. But something just keeps gnawing at your insides that I should be doing this or that. I feel good when I save a dog. Why? I jus' don't know. So despite all the negativity and chaos, I feel there's some purpose but can't put a finger to it. And that angers me, because there seems to be no focus. And you have to fight the good fight to live the life you want to. So I guess the only thing that gets me off is purging out these thoughts that get churned out by my thinking-time loop. And until I strike a balance and get off the chronos, you gotta put up with this existentialist crap. Have fun!
Posted by AccHor at 3:57 PM No comments: 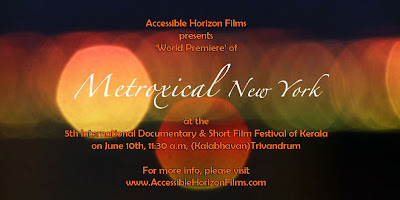 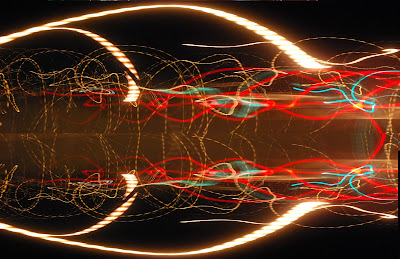 Dang! You know how sometimes you seem to have a lot on your platter but you're unable to do any of it. Those things keep hovering over your head but you just can't shift gears to do them. It's like there absolutely no motivation to 'do' things. No inspiration...zilch! I don't even know if I can or want to write this right now. You know, mindless meandering...I like to call this feeling 'Baaaeaaa...'. That Baaaeaaa feeling! The censor board awaits 500 &5, but we gotta transliterate this whole script. It's basically like rewriting the script all over again and typed it out in Tamil. Also, today was spent on looking and trying to get inspired from other people's work...that creative thingie that hangs around the universe. Don't know. But there's a higher purpose to all this, sort of. Like we got a responsibility to do stuff. Sometimes there's a need to be grounded in this reality and other times, this need to go where the dragons are...but you know you gotta strike a balance. Shit! Is this Baaaeaaa...gonna do the vamoose or what?
Posted by AccHor at 1:27 PM No comments: