A big thank you to all our friends, family and friends of friends who joined us on the 5K Run on Sunday. We're super excited to share our celebration of 500 & 5's Audio Launch. And for those who haven't seen our Facebook updates, here are the pics of 500 & 5's coverage in the media in both Indian Express and in Dhinakaran. 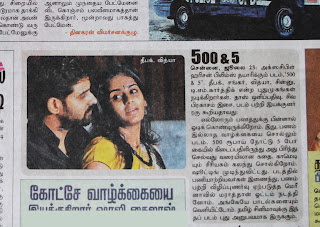 The names in the Dinakaran article have been interchanged. Must have been Shankar and Lakshmi Priya. Nevertheless, congrats are in order for Deepak Sundarajan, Sivashankar Srinivasan, Living Smile Vidya, Chinnu Kuruvilla and TM Karthik Srinivasan and Lakshmi Priya :)
And here's the link to the Hindu article - http://www.thehindu.com/news/cities/chennai/article3682418.ece written by Preeti Zacharia, who had joined us on the run too. So...
Posted by AccHor at 12:36 AM 1 comment:

A purpose beyond realms...

RAJESH KHANNA...A soul amidst this chaos called reality..was brought into this realm..with a purpose..to bring to life many creative minds' ideas and visions to manifestation......and the movies..the thoughts that their works provoked, the emotions that were shared..the songs that he portrayed..the culmination of a lot many creative minds into many works..the characters so real..that each one who connected with the films had a bonding with..the face that brought all their ideas to the world..and made the manifestations so real in this otherwise mundane world...RAJESH KHANNA..a purpose fulfilled..and complete! The above song..is from the movie Anand..one of such works..which has touched million hearts..and is an all time inspiration! I feel connected! Many moments of my life owe their gratitude to his purpose!!Thank you universe for the experience.
Posted by earthling at 1:42 PM No comments: 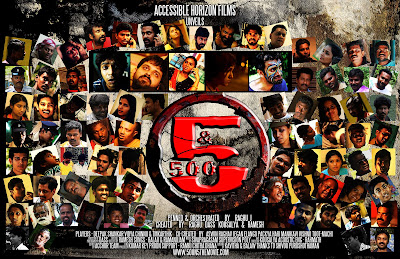 Yeeeooowwww...here's our little tribute to 'almost ALL' the 'Actors'(Cast) who played a 'Role' in 500 & 5. See, the thing is, each of those words are loaded, that's why they're in quotes.
1. Because the people that are in this poster don't constitute ALL(coz we haven't included a bunch of 'hand' actors, who've showed only their hands in the film),
2. Because most 'Actors' here are not really actors, except those in our key/primary roles. They're friends, friends of friends ...and people...'real' people who just happened to be on the production set who just did it for the fun of it,
3. And 'Role' here means, even if an actor happened to show their face or body for a second, they are considered to have played a 'Role'.
So....a SPECIAL & BIG THANKS to all of you in our Cast because without you, 500 & 5 wouldn't have been possible!!!
(See if you can spot your friends :))
Posted by AccHor at 12:35 AM No comments:

A time and place

You know, there're some things that never fail to transport you to a time and place. Sometimes, it's the haunting memory of something and other times it's a just an evocation of something lost. This video that we shot about 4 years back is one of them.
Posted by AccHor at 10:55 PM No comments: 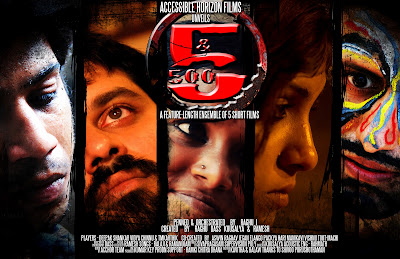 Well, just got this out from our Photoshop press. Got a few more which will follow soon. Couple of vertical ones. Another one with the entire cast of 500 & 5, including extras and all. Let us know what you think and if you need to download this at a higher resolution, just buzz. (Above cast in order: Deepak Sundarajan, Sivashankar Srinivasan, Living Smile Vidya, Chinnu Kuruvilla and TM Karthik)
Posted by AccHor at 5:47 AM No comments: 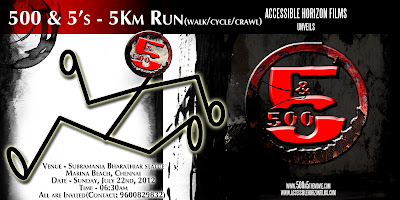 How ‘bout another 5? Yeah folks, this time the ‘5’ is a 5Km(& 500 meters) ‘Run’ or Marathon.
You ask, “Marathon? You mean like running? Like exercise?”. And we say, “Well, not really, but if you wanna put it that way, you can.” See, let’s get this straight ok? You can run, walk, slow-jog, fast-walk, cycle or even crawl but you gotta reach the finish-line. No auto! So anyways, this is gonna be a 5K run with the Cast, Crew and Friends of ‘500 & 5’ and Accessible Horizon Films. Everyone’s gonna be there and we want YOU all to join in on the fun and a cause.
Why are we doing this and why do we want you with us? Really…well, there’re 2 reasons.

1. As many of you now know, ‘500 & 5’ is a feature-length ensemble of 5 short films with stories containing Gangsters, Romance, Reality, Dark fantasy, Social rebellion, etc. Despite all the ‘Cinematic’ elements that it contains, the underlying theme of ‘500 & 5’ deals with Money (as the omnipresent yet futile concept that rules us all) through the 5 main characters (and eventually envisions a world without money). Like many seemingly impossible things, this too starts with an idea. In a world where there’s a price tag to anything and everything including basic human-ness, we thought it necessary to shake things up a little. You know, break down the existing concept of Money and bring it down to its knees, at first theoretically, then through the film and eventually, maybe…maybe initiate a dialogue in that direction. We’ve tried to stick to this philosophy even for the ‘Making’ of ‘500 & 5’, which is why we’ve been able to do it independently and without major financial resources. And things like ‘Human-ness’ and the L-word (that ‘blasphemous’ L-word, Love, that we, as a society are embarrassed to use anymore) seem to have lost their meaning and have been replaced by the M-word. So we wanna give a shout-out against that change. How ‘bout that?
2. Now, now, since this is also a promotional campaign for the film ‘500 & 5’, we just wanna have some plain, unadulterated fun with the people who worked with us and made this project into what it is now. There have been tons of people, I mean, real people involved in this project with whom we’ve had too much fun during the making and we want to unwind a little after all that hard work we put in. We want you in on this because this film project is a labor of love made outside the confines of the studio system and we wanna share the euphoria associated with it at a ground level(literally) not at some big, staged, ticketed event.

So…if you’re even a wee bit interested or just wanna get off your uhh…we mean, couch, do join us. Since we'll have some special giveaways for you, we'll need a headcount, so please DO register (it's FREE)with your email at our website http://500n5themovie.com/5KRunRegistration.php. (And hey, if you can’t make it and wanna show your support, you can Like our ‘500 & 5’ Page. It’ll be a booster for our run.)