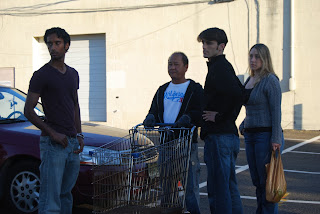 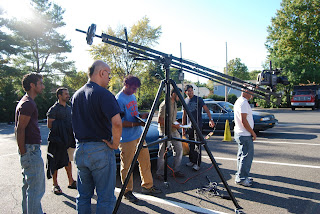 Renamed. Yes, folks, as expected. The next production of Accessible Horizon Films has been changed from Contrast to 'A Chasm in Time'. Some updates and new pictures here. The rough cut has been completed and the soundtrack is currently being designed. Nanda is helping with the music. It's coming out almost as planned save a few aspects. The performances seem to be in sync - let's see. Also, DP Fruto Corre has done a great job.
Here are some new Production Stills - Bottom to Top
Production Still 1(left to right) - Karthik Srinivasan, Mani, Robert Dixon, Ramesh Mourthy, Raghu Jeganathan and Mohandass Radhakrishnan behind the Jib, Fruto Corre(DP).
Production Still 2(left to right) - The entire Cast(left to right) - Karthik Srinivasan, Nelson, Joey Mintz and Kymm Walker
Watch out for updates...
Posted by earthling at 2:18 PM

For the life of me, I do not know.