Way Past the Time... 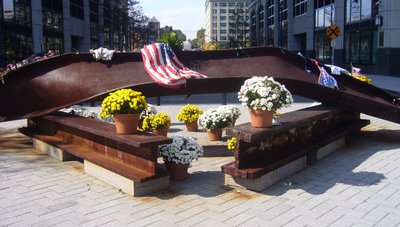 We recently went to a place called New Port in Jersey city, New Jersey. From there we could see the enitre New York city skyline across the Hudson river. The view reminded us of a fast growing world and made us wonder about our position and role in this universe. On this side of the river, there was a board walk which led us to a memorial built for the people who lost their lives on September 11th 2001 at the World Trade Centers. This memorial was built right in line with the original World Trade Centers but on the New Port side of the river. Only the Trade Centers were missing now!
The above photograph is the view of the New Y0rk City skyline from New Port, Jersey City, without the Trade Centers taken on October 2006.
The three I-Sections which are in the other photograph were taken from the wreckage of the Twin Towers.To even imagine that they had been parts which had held the huge structures five years ago, was so strange.
No matter what the truth behind the bombings are, we can never deny the fact that lives were lost. Lives with dreams, hopes, faith, happiness etc were silenced there!
Many lives are still lost each day even without our knowing it or the media exposing it.
It is way past the time we got together and did something to spread peace and love in this Planet.
Posted by NatureandI at 11:27 AM

Email ThisBlogThis!Share to TwitterShare to FacebookShare to Pinterest
Labels: 9/11, Issues

It was a calm Sunday afternoon, the place was so deserted, i dont know if its because of the weather or it was always like that.... this is a memorial for those jersey city residents who died in WTC. Its a list of the innocent people who died there and how life must have changed for those who lost their loved ones. If it were a peaceful world we would not have lost lives like this and for similar reasons in other parts of the world. Let's all work towards making our world a peaceful place. Where LOVE and ONLY LOVE exists.